The sponsor of the Echappée Belle 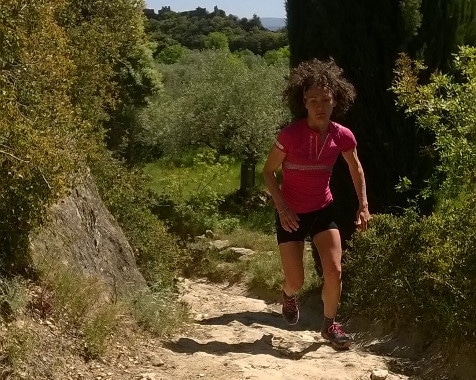 To discover a race, a massif, paths, to go out of my comfort zone!!

Why this race attracts you?

I live in Isère since 6 years, I could run many mountains around, but not really in Belledonne, excepted in 2016 during the UT4M, but I was there by night…so I would like to discover it now…

What’s its difference between the other races?

In general we run around a mountain with practible paths, or we cross in its width by a pass. With the Echappée Belle we’ll cross in its length. The mountain, we won’t see it by raising eyes, we’ll be on it, and it under our feet…this is a big feeling of freedom and to be alone in the world. I LOVE IT!

No, but I should come for the second recognition in August.

Do you plan a specific training?

No, just a classic training for a long mountain run. Endurance and mental are the basis for this kind of ultra trail running (+ food, but I’ll have assistance on all aid station). The technicality would be essential on a short format, with the speed; on ultra it’s much less important. I’m not a chamois but I’m used to the mountain, I’ve “mountain foot”, so nothing special to endure the technicality which makes the reputation of the Echappée Belle.

What do you recommand to the other runners?

Recommandation #1: to try to follow me…
No, seriously I’m not sure that I’m the best to give advices for the training, because basically I use a lot of advices heard from everywhere.
When I’m racing I’m in my world, but my training isn’t a model.
In race I say that you’ve to let the night pass, it’s a new game on the morning, everybody doesn’t spend its night in the same way…

Because in theory I like this kind of format, it’s in adequacy with the races I like and I use to run…ultra trail on mountain. I wouldn’t have accepted the same proposal for a 10k on the road…

Some of her results: 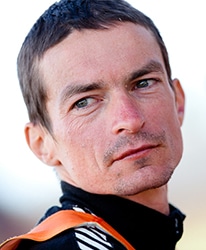 I live on the plateau of Petites Roches, I see Bellebonne everyday, the race is on the same time magic and a bit mad. Live an adventure near my home is very attractive. No need to go on the middle of nowhere of Australia, or on the Great Wall of China to have adventure.

Why this race attracts you? What’s its difference between the other races?

I don’t run a lot of trail running in competition because often I’m bored on route. Echappée Belle is very different, you must be hardly,  hard through and through, and we know that nothing will go as planned. Run by night add a special feeling, it’ll remind me the best moments that I spent on the raids adventure.

Do you plan a specific training? What do you recommand to the other runners?

My training will be specific, it’ll be my only competition of the year. I’ll start to train in Chartreuse, but since July I’ll run especially in Belledonne. I should recognize the path completely.

I recommand to the others runners to ask question to the ancien finishers: them they knows!

It’s a big pleasure to promote so many nice local event as Echappée Belle and Grand Duc. I thank Pierre Gagnière to have asked me to be sponsor of this edition. Otherwise I hope to meet people and spend good time with the organization.

Winner of more than 50 races and often on podium, Christophe Le Saux has participated and won the greatest trail running on the planet, including the Marathon des Sables, the Track Outback Race (Australia), the Guyane Trail, the Guada Run (Guadeloupe), the Cordillera Huayhuash (Peru), true icon of racing in natural and wild environment, he knew how to make himself known by his mastered technique, his extraordinary physique and his kindness.

Christophe Le Saux started running at 11. After joining an athletic school where de discovers all discipline, he’s passionate about long distance racing. Then he participated to many cross running and increase in distance step by step. He run his first Ultra Trail in 2004 with the Grand Raid Caroux-Occitanie where he wons in his category and has immediately contracted the Ultra virus. Through trail running he’s looking for freedom. He likes to be on the nature and discover new countries, their landscape and cultures.

“The Echappee Belle is an Ultra Adventure. It’s difficult but the splendid landscape and the smile of volunteer make us forget the pain. A special thank to Florent Hubert and the EB Team for making us dream on this race that we would never do alone. A splendid mountain and an exceptional trail running”

At 43, Janick Delva demonstrate surprising regularity and progression: “I discovered running 10 years ago. My first jogging, 13,6km, seems to me interminable! Then I very quickly oriented to the nature races and trail running. Running in the middle of the nature seemed obvious.” Today she run ultra-trail beyond 100km. She likes technical races, the Echappee Belle was made for her.

She needed to stop at the refuge of La Pra, due to ankle injury.

“This is the wild and technical part of the Echappee Belle that attract me.I think that all part can be difficult…on that kind of race, you must be always attentive with the gestion of your effort. The track is really demanding and allow us to discover an exceptional environment”.

EMILIE LECOMTE, WHO MAKE A LOT OF PODIUM AND VICTORY, PRESTIGIOUS PALMARES

Emilie organizes her season according to the places she want to discover and the races that make her dreaming, the Echappee Belle was one of them!

Start the trail running late and somewhat by chance, she’s now one of best runner. “I was racing multi-sport, running was a discipline to work for raids. A fracture to the collar bone launched my first season of trail running, if I can resume it like that!… It was early in 2009: as I couldn’t bike due to this injury, I started to run…Among my best memories, there’s of course the tour record on the GR20, June 21st, 2012 in 41:22, and the Tor des Géants in 2014, for the extraordinary human adventure represneted by those 2 adventures…As the most victories have most marked me , probably the Grand des Pyrénées in 2012 and the Trail des Aiguilles Rouges (TAR) in 2010”, she explains before to participate to the Echappee Belle.

After more than 20 years of alpine skiing and ski mountaineering, he’s now a recognized runner in the world of trail running.

“I spent a lot of time to start trail running. I practice first alpine skiing than ski mountaineering for about 20 years at high level. In the summer I practised many activities as mountain bike or climbing, and naturally I started multi-sports raid. I started the trail running only around 40’s. Thanks to my years of endurance, I had quickly good results in mountain race, with several victories on the Tour des Glaciers of the Vanoise, the Tour de la Grande Casse, the Trail des Ecrins, the Marathon of the Ultra Trail Toubkal, the 6000D, the Restonica in Corsica….”

Lionel Bonnel needed to stop in Gleyzin due to a back pain.

In search of human adventure, Lucas Humbert was pleased to sponsor the Echappe Belle, a race linked with his values, “an eco-responsible event, having as objective to discover a Mountain, Belledonne, by involving local players…The Echappee Belle really allows you to immerse yourself in the mountains and soak up this environment. I hope that despite the intensity of effort, the runner will appreciate the beauty of the landscape and feel the authenticity of these places…I would simply advise the runner to not consider The Echappee Belle as a classic race, but as an adventure, with the only objective to be finisher!!!”

“I discover the trail running and multisport raid (trail, mountain bike, kayak, orientation) in 2004, by meeting Denis, my friend, and I immediately enjoyed it. My parents gave me the taste of nature and the mountain (they’re climbers) and I love hiking and mountain biking. In 2005, I registered in by chance in the Grand Raid of the Reunion, for a beautiful 1st place and a sacred memory. In 2008 I made 4th on UTMB. On multi-sport I’m part of Team Raidlight and in 2010 we won the French round of the World Championship, and finished 10th at the finale of the World Championship. In 2012 we finished 6th in the final of the World Championship (Raid in France)”.

“ I like challenge, and the crossing of Belledonne, it has the mouth anyway! I like when it’s technical with the most single track as possible”.

OSCAR PEREZ LOPEZ, LOVER OF THE MOUNTAIN AND ATHLETE OUT OF THE ORDINARY, SPONSOR OF THE FIRST EDITION OF THE ECHAPPEE BELLE

“ Discover new countries and their mountains, it’s my biggest motivation. The trail running is another way to bring the moutains closer together.”

Oscar Perez Lopez winner ot the 1st edition of Echappee Belle in 28:00. He’ll finish 2nd of the Tor des Géants only 10 days after.